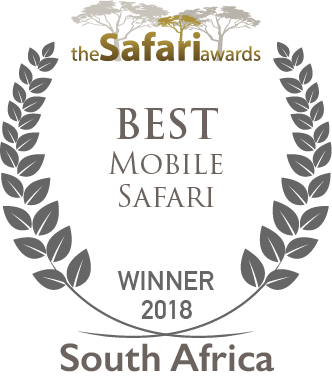 With a roll call of beating drums and the popping of champagne corks, owner Peter Hayward and his agile team were delighted to receive this well-deserved accolade: “Twenty-five years before the famous explorer David Livingstone arrived in Africa, my Great, great grandfather, 24-year-old James Hayward, arrived on the tip of Africa on an adventure into uncharted territory. He was one of the first true pioneers into a landscape that teemed with vast herds of wildlife. Today, we are proud to carry on the tradition of bespoke, authentic group mobile safari’s in a tradition that originated in 1685. Today, the Grand Safari continues to play a pivotal role in preserving the continent’s environmental heritage and showcases Africa’s unique natural capital.”

Hayward’s Grand Safari Company is not a new contender to The Safari Awards, they previously received Best Mobile Safari Company in South Africa two years in a row and Highly Commended as Best Mobile Safari Company in Africa. Having now reached the pinnacle achievement on The Safari Awards platform, Hayward said, “This award is not just a quick pat on the back for us. It sets a standard in the industry for Africa. It’s not about ego either, its industry validation that all our hard work over the past 20 years is finally paying off. Currently, we consistently continue to receive an average 9.6 out of 10 across 22 points of guest satisfaction feedback from our delighted customers who experience a Grand Safari expedition, so to have this internationally recognised and acknowledged establishes our reputation abroad and helps our employees take pride in their work and continue in their efforts. Further to that, it instils confidence in customers regarding the quality and professionalism of our organisation and raises the profile of the continent of Africa as a travel and incentive destination within the tourism industry globally.”

Established in 2008, The Safari Guild was formed to manage The Safari Awards as a platform to recognise excellence within the safari industry and encompasses a vibrant community of over 5 000 safari specialist agents sharing product knowledge on over 1 200 safari lodges, camps and operators.

“The Safari Guild and these awards have an important role to play by influencing the debate on how best to manage and protect dwindling wildlife resources, by working with the people who own it.” – Henry Hallward

Says CEO Henry Hallward: ““The Safari Guild and these awards have an important role to play by influencing the debate on how best to manage and protect dwindling wildlife resources, by working with the people who own it. Our expectation is that travel professionals who engage with The Safari Guildwill, in time, use their influence and buying power to reduce unnecessary exploitation of wildlife resources and encourage and support safari operators to share their gains equitably with the local communities and wildlife conservation entities that enable primary protection of wildlife for future generations.”