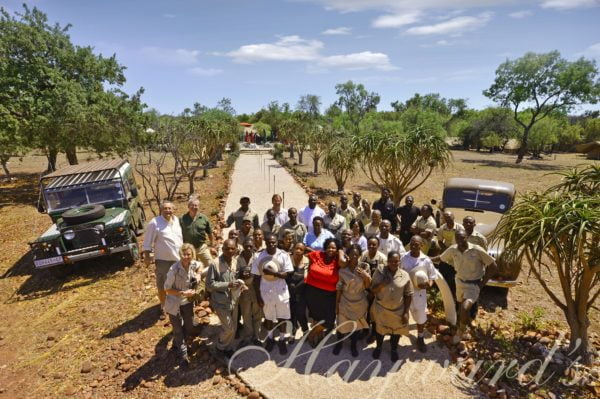 This is the 5th consecutive award Hayward’s Grand Safari Company has received for their 5-star mobile safari lodge expeditions and events from The Safari Guild’s global annual awards.

Best of the Best in Africa

Owner and adventure extraordinaire Peter Hayward was understandably jubilant on hearing the news. “This is an amazing achievement for the Hayward’s team, competing and winning against the best of the best in Africa! We are extremely proud of this honorable award.”

The Safari Awards is open to global participants engaged in wildlife travel either as a property or conservation organisation. Winners are carefully chosen by a panel of knowledgeable and highly respected independent safari operators who put each award nominee through rigorous inspection.

Over and Above Expectations

Says Safari Awards CEO Henry Hallward: “Here at the Safari Awards, we know that every safari is unique and special but our Awards give credit to the lodges, guides, spas and food that guests have experienced on safari that go over and above their expectations.

“It is not all about luxury but about the essence of a safari experience that showcases the wonder of wildlife, as well as providing a memorable visit or adventure. The Safari Guild and these awards have an important role to play by influencing the debate on how best to manage and protect dwindling wildlife resources, by working with the people who own it.”

With over twenty years’ experience in big game safari expeditions, Peter Hayward says: “Before the famous explorer David Livingstone arrived in Africa, my Great, great grandfather, 24-year-old James Hayward, arrived on the tip of Africa on an adventure into uncharted territory. He was one of the first true pioneers into a landscape that teemed with vast herds of wildlife.

“Today, we are proud to carry on the tradition of bespoke, authentic group mobile safari’s in a tradition that originated in 1685. Today, the Hayward’s #GrandSafari continues to play a pivotal role in preserving the continent’s environmental heritage and showcases Africa’s unique natural capital.”

“This award is not just a quick pat on the back for us. It sets a standard in the industry for Africa and is industry validation that all our hard work over the past 20 years is finally paying off.

“We consistently receive an average 9.6 out of 10 across 22 points of guest satisfaction feedback from our delighted customers who experience a Grand Safari expedition. To have this internationally recognised and acknowledged further establishes our reputation.”

With headquarters in the all new big five Dinokeng region in Tshwane, just north of Pretoria and one hours’ drive from Johannesburg, Hayward Safaris hosts events, product launches  and conference functions for the corporate market, as well as big group mobile safaris for between 40 and 200 guests into pristine wilderness reserves across South Africa, Namibia, and East Africa.

Says Hayward, “Here in South Africa an award like this helps our employees take pride in their work and continue in their efforts. Further to that, it instils confidence in customers regarding the quality and professionalism of our organisation. It also raises the profile of the continent of Africa as a travel and incentive destination within the tourism industry globally.

“We couldn’t be happier to receive this ‘best in Africa’ award and wish to congratulate all the other winners in their categories as well as our loyal agents and guests who we host and engage with regarding our luxury safari offering.

← HOW LONG SHOULD I BOOK FOR AN AFRICAN SAFARI? SCALES OF ECONOMY AND VALUE FOR MONEY →