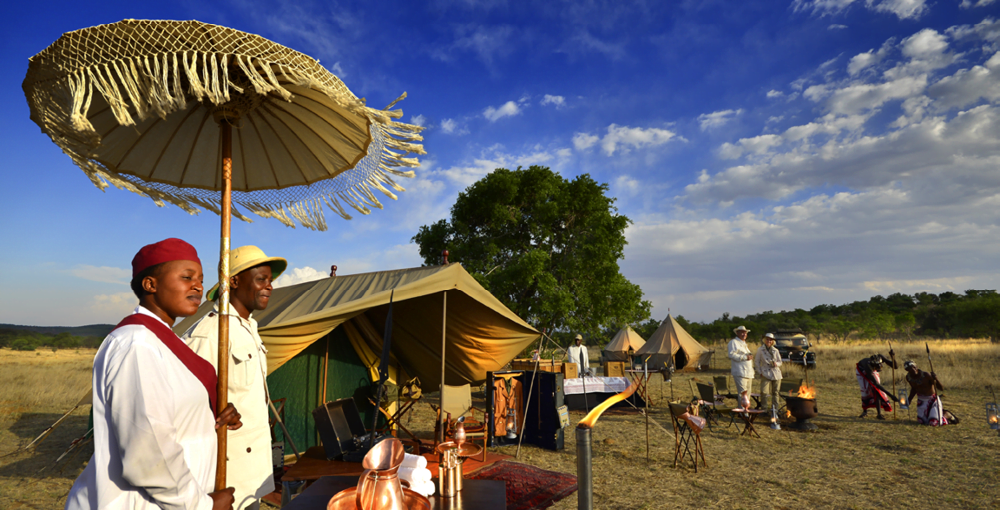 A TASTE OF WHAT IT TAKES TO HOST ‘CELEBRITY’ ON SAFARI: HOMAGE TO ‘MADIBA’ ON FREEDOM DAY 2017

“If you could host anyone in the world, dead or alive to dinner, who would it be? It’s an age-old interview question asked to ascertain whom you most admire and respect.

Not surprisingly, Nelson Rolihlahla Mandela’s name comes up frequently and will continue to do so for generations to come as nations around the world remember him as an icon of South African democracy and justice and winner of the 1993 World Noble Peace Prize.

Peter Hayward, owner and pioneer conceptualiser of the Grand Safari mobile hotel, Hayward’s, got to be of luxury safari service to Madiba and his generous host Douw Steyn, for a series of safari dinners when Mandela would retreat to Steyn’s estate at Shambala Game Reserve in the Waterberg Mountains, to write one of his remarkable books about his journey to freedom amid the political ideology of Apartheid in South Africa.

Eternally a symbol of freedom and peace, Mandela’s birthday on the18th July now marks an annual international day of Freedom and acts as a global call to action that celebrates the idea that everyone has the power to transform the world, and the ability to make an impact.

“Whenever there was a public or private celebrity event being held around proceedings at Shambala, also known as The Centre for Reconciliation, and extra accommodation was required, we would host and accommodate up to 120 guests in our 5-Star mobile Grand Safari camp” says Peter.

Peter Hayward’s very first encounter with Madiba’s presence was for the 2001 Miss World pageant which was being held in the country where over 90 Miss World contestants from around the globe came to the opening of the Centre For Reconciliation at Shambala. “I remember him surrounded by the most beautiful women from the many different countries, who arrived as Ambassadors of Peace; he always was a very charming man. There was a lot of celebration at the time and tycoons and visionairies being hosted there along with South African performers such as PJ Powers.

“What has always stood out for me over the years is that Mandela epitomised the human characteristics of being ‘interested’ instead of trying to be ‘interesting’. So many politicians today just don’t get it right; instead they do things to be interesting. Mandela never demanded attention; he was respectful to everyone he met. He was interested in who they were and what they were doing, how they achieved and ran their lives.  You never heard him speaking about himself much; it’s a unique trait not seen in today’s world of political staging.

“Mandela displayed true leadership qualities. He was intent on looking for solutions, in finding the middle road; working with the A team no matter their colour, he wanted the win-win situation which you can’t do if you are always trying to be interesting and are only focussed on the ‘me, myself, I’ concept, which just gives lip service to business people and the tax base of the country.

“Saying that, he unwittingly represented one of our most challenging event crises management memories,” laughs Peter. “We were hosting a 200-seater dining event for Mandela in our luxury safari dining tent together with an in-house band and honorary guests, which included the King of the Netherlands and his wife and full security protocols. Everything was prepped and ready with guests set to arrive in half an hour. It started to drizzle, which is normally not an issue but on this particular day one of the tent linings started to drip, directly onto Mandela’s chair. We couldn’t replace the tent at that late stage so we had to rearrange the entire configuration of a 200-seater dining tent and music stage in record time! We did it thanks to the unfailing professionalism of our team but we were sweating, just a little. In his later years, when he couldn’t walk any great distance anymore, we built Hayward’s Safari camp so he could have his escort drive right up to the dining tent so he could be seated directly for dinner.

“Hayward’s Grand Safari concept is often chosen today specifically for the fact that we guarantee all our clientele world-class privacy and security protocols whether our camp is hosting royalty, rock stars, politicians, tycoons, world celebrities or corporate groups requiring complete privacy. We can set up camp in some of the most remote wilderness areas, be it South Africa, Botswana, Namibia or Mozambique, where guests can only arrive and leave by helicopter, many of our exclusive guests like that type of discretion and a confidential place to relax or work where they simply can’t be reached.”

Looking for a luxurious 5-Star retreat for your VIP guests? Discuss your bespoke requirements with Peter Hayward or Celia du Preez.

← BRAND LAUNCHES OUT OF THE BOX AND INTO THE WILD CELEBRATING WOMEN’S DAY: CUSTODIANS CREATING A WORLD INHERITABLE TO OUR →