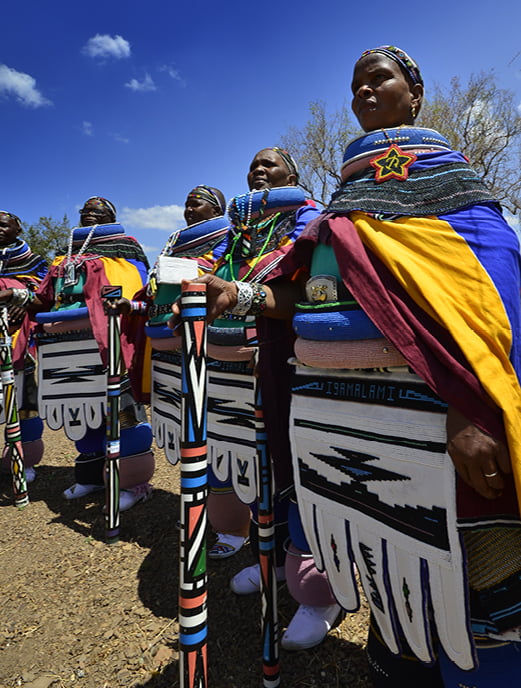 CELEBRATING WOMEN’S DAY: CUSTODIANS CREATING A WORLD INHERITABLE TO OUR

The 9th of August is a day of rest. It celebrates a day when women can put their tools of protest down and rest in peace knowing that they are pioneers of freedom and democracy; that women have been birthed a voice to speak up, move freely, have an education and a right to entrepreneurship and economic empowerment to make a life worth living.

Given the traditional name “Qhwebezani” which means ‘shining light” and referring to the shimmering blue-green colour you find in an oyster shell or the wings of a Starling, travel and adventure blogger Celia du Preez is one such custodian. Partnering with a group of South African artisan women she develops and markets traditional custom beaded handbags for local and international markets so these female entrepreneurs may remain deeply rooted in their culture and enjoy entrepreneurial success through their tradition of bead work.

With a ‘day job’ as Production Executive at Hayward’s Grand Safaris where she creates five-star luxurious tented safari events for illustrious client in wilderness areas where no other hotel exists, Celia also runs her personal brand Celia in Africa which communicates and promotes globally the traditions and cultures of local artists and communities in South Africa.

“My primary goal was to support local artists, make them even prouder of their tradition and culture and to enthuse the younger generation, thus preserving the intricate knowledge and allowing skills transfer between the generations. Otherwise the traditions will eventually disappear. Everything today is instantaneous, and the truth is, the ancient way of living is self-sustainable. It’s becoming increasingly important to get back to basics, keep traditions intact, and to support local communities’ pride in their culture (especially arts and crafts), as this is a built-in safety net for the survival and ethics of future generations.”

Brought up in North West close to the African bushveld and community traditions, it was a natural progression for Celia to work on the land and the people she loves:  “Through our expeditions in southern Africa, I’m always in search of new territory for tented camps in places of significance. I often wonder off the beaten track looking for the pulse of the region and the heartbeat of the community, the local artisans, the storytellers and elders of a village, the sacred values of the area and the inspiration for what is created or traded.

“I found a wonderful group of older women – all grandmothers – with whom I currently work. They’re based on the border of Gauteng and Mpumalanga, in the Ndebele tribal area. The Ndebele women are creative artists well versed in beading and I guide and mentor them in creating artwork with universal appeal. I ensure they have the necessary craft materials and tools, and troubleshoot the process from start to finish.”

Currently, Celia is in a joint venture with a KwaZulu-Natal based community and factory. Her ultimate dream is to have so many orders for the bags that they’ll be able to open a dedicated Arts and Culture Centre, funded by the project.

As executive director of Hayward’s Grand Safari Company which takes kings, presidents, rock stars and corporate groups of up to 200 people for VIP, 5-star mobile safaris in to some of the remotest regions on the continent on their Sacred Safaris© and Grand Safari expeditions and themed Trader Camps; Celia and owner Peter Hayward have hosted other iconic women such as Oprah Winfrey, Mary J Blige, Tina Turner and Mariah Carey to name just a few.

Says Celia: ““Women need real moments of solitude and self-reflection to balance out how much of ourselves we give away. Working with nature, in the bush, it is a place of peace, divinity is the smallest creature from the butterfly to the giraffe and there is always a purpose. Hayward’s sees itself as delivering the privilege of nature to those who can forget when you live in a city. We all navigate by the stars even if it is just subconsciously. With every woman I meet, whether philanthropist Oprah Winfrey or local artisan Esther Mahlangu we carry the beacon to shine the light on the plight of other women. We are in this together and we are stronger together.”

“Women’s Month is a tribute not only to the thousands of women who marched in South Africa in 1956, but also a tribute to all the pioneers of the women’s movement in this country. There may come a day when women don’t have to be celebrated — when every day is women’s day. Until then, I am proud to play my part in uplifting the art, beauty and culture of South Africa through our Grand Safari expeditions for illustrious opinion leaders, celebrities and companies to learn about Africa and its unknown ancient wisdom and to get involved in ways of making a meaningful difference to the future survival of the planet. South African culture is rich and illustrious too and the world needs to know more about the artistic heritage on offer.”

← A TASTE OF WHAT IT TAKES TO HOST ‘CELEBRITY’ ON SAFARI: HOMAGE TO ‘MADIBA’ ON FREEDOM DAY 2017 INDUSTRY RECOGNITION FOR MICE PROFESSIONALISM IN LUXURY SAFARI EXPEDITIONS →