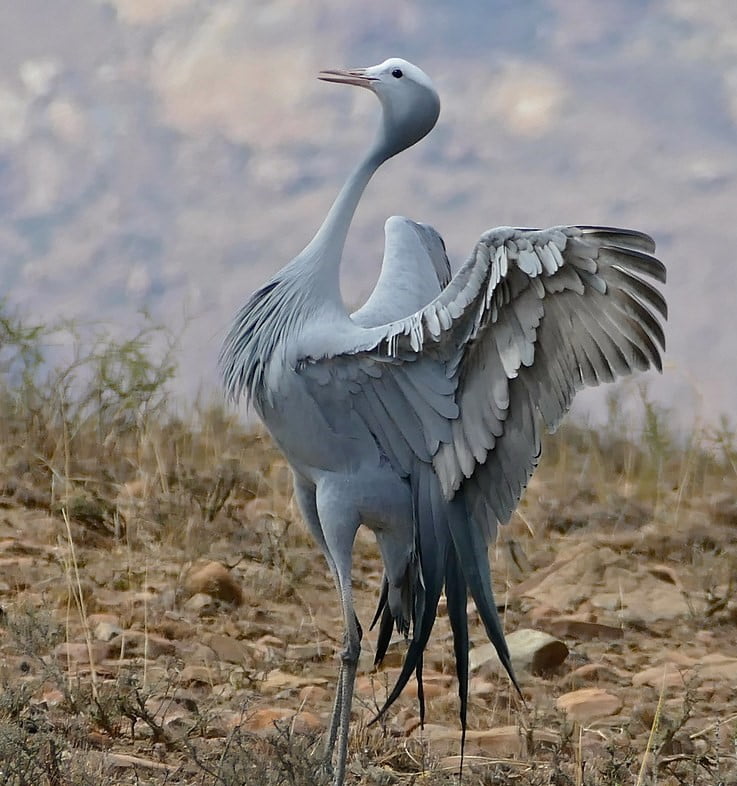 The Xhosa people call South Africa’s national bird, the Blue Crane by the name “Indwe”. During battle, when a warrior showed bravery in combat, he was honoured by the chief by having the feathers of the Blue Crane weaved into his hair. These warriors were then known as men of “ugaba”, or trouble, meaning if trouble arose, they were the ones who could restore order.

The Ndebele of South Africa call the Blue Crane “Mxololo”. The species is respected for what is considered its bravery and hunting prowess with fireside tales telling of how Mxololo will catch a dangerous snake in its beak, fly high into the sky and drop it from great height to kill it. This high regard in which they hold the Blue Crane, means the Ndebele are forbidden from hunting or eating it.

Apart from South Africa’s graceful grey national bird however, the country’s variety of vast wildlife habitats and reserves means it offers some of the best birding spots in the world.

Gauteng’s Dinokeng region, which is home to Hayward’s headquarters, and affectionately termed Hayward’s Safari Sanctuary, is one of South Africa’s best bird-watching regions in South Africa, in terms of species and numbers. Drive just one hour from Johannesburg or a mere 30 minutes from Pretoria into the Dinokeng wildlife reserve region, and you will experience the highest count of bird sightings in South Africa equaling over 350 species in just 24 hours.

Here traveling ornithologists and homespun birdwatchers alike find a flight of fancies from the African finfoot, the Olive-tree warbler, the Golden pipit, the iconic Fish eagle, crimson-breasted shrike and European golden oriole and up to more than 350 other species which can be spotted over the span of a weekend during the busiest bird season months between November and April.

This is due in part to its Highveld mix of distinct grassland, bush veld Acacia and wetland ecosystems which attract a wide variety of birds to a comparatively concentrated region. One which lies just a stones’ throw from the city centers of Pretoria and Johannesburg. In fact, its convenience to major travelling routes mean that Dinokeng, which also offers its own Big Five wildlife reserve is a more popular option for nature travelers who don’t want to do the logistical trek to the more popularised Kruger National Park.

Offering a Big Five experience on a par with that of the reputed Kruger National Park, the Dinokeng’s Big Five wildlife region has the added advantage of offering simply spectacular birding safari opportunities along with all the benefit of its variety of biomes and flora environments bordered in luxury with quite simply… less people.

South Africa’s wetlands are magnets for huge numbers of water birds such as flocks of pelicans, storks and flamingos congregating alongside highlights such as Pink throated Longclaws, Pygmy Geese and Lesser Jacanas.

These gatherings are especially apparent in one of South Africa’s many world heritage sites, that of the iSimangaliso Wetlands Park in the KwaZulu-Natal province.

Encompassing Lake St Lucia and its estuary it supports between 6 000 and 17 000 (8 800 avg) birds at any given moment over the year. Its vast lake – 80km long and 23km at its widest point – is surrounded in places by mangrove swamps, dense reed beds and rims of water lilies, and forms the core of one of the most important breeding areas for water birds in South Africa,

The park itself extends from Kosi Bay in the north to Mapelane in the south and across to Mkuze Game Reserve in the west with the uMkhuze section of the Park renown as a  birding destination, hosting 420 of the Park’s recorded species together with healthy numbers of Great White Pelicans, Marabou Storks  Yellow-billed Storks, and African Spoonbills

The greatest factor affecting bird population dynamics in South Africa is human-induced climate change and in certain parts, such as the Kruger National Park, that of elephants which have been responsible for widespread tree destruction in the eastern grasslands which have the effect of disrupting breeding cycles in nesting sites.

When is the best time to book an ornithologist’s dream mobile safari in Africa? October to March is when the bird population swells by approximately 200 migrant species that have flown south from elsewhere in Africa, Europe and Asia. Migrants and nomads are seen to normally arrive after the first summer rains when the availability of water ensures that food is plentiful.

Book your birding safari expedition ahead of the season and remember to bring along your binoculars, camera, time on your hand’s to lift your eyes and look to the skies, and your favourite traveling companions to make the most of your birding safari adventure together.