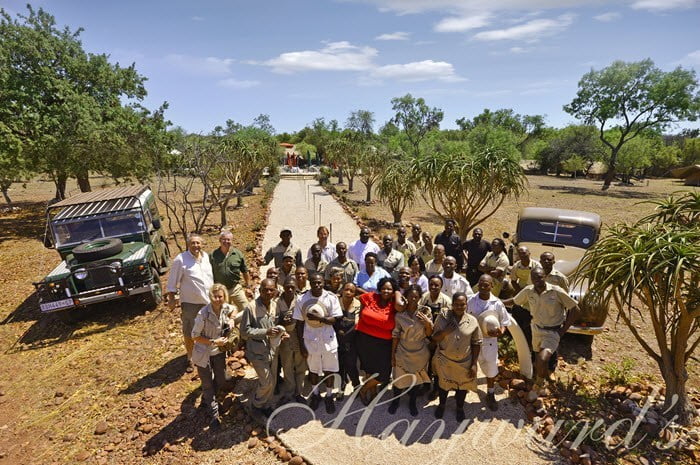 Grand safari greetings to you

I recently had the pleasure of producing a Grand Tented Camp Safari Event for a group of ninety business tycoons, their partners and children.

There was absolutely no confusion from the host as to exactly how he wanted his two day safari event to roll out. His poised wife was just as clear as to exactly how the choreography should present itself and this continued right into each and every guest tent where spectacular gift amenities were presented.

Little extras were brought in, such as a special Rangers Camp built for the adventurous pre-teens, complete with their own log fire and game guide on hand to keep them intrigued at every opportunity.

The guests were well briefed in the invitations that were sent out and came quite prepared for any eventuality that Mother Africa may have thrown at them. The guest list was no less than some of South Africa’s leading fashionistas, so there was more than enough glamour on tap to enthrall the absent paparazzi – sorry for them as this was an exclusive private safari set up in an unknown location on the outskirts of town.

As you may be aware, I’ve been running big group safari events since 1991 and have led each and every one to ensure that each grand safari runs like clockwork. That’s quite a tally of safaris and a book or two can be written on what it takes to pull off these sorts of safari events. It’s been my personal quest to find the perfect guest, the perfect group, the perfect team and this event was right up there in that zone where eagles soar.

The question is, WHY?

The pre-production of this event led by my partner Celia, was no less than impeccable (Celia was recently recognized as a Leading Woman in the Meetings, Incentives, Conferences and Events industry). Her ability to communicate professionally and understand the client’s mandate was spot on. They were crystal clear as to how every moment would unfold and in full agreement on this.

On top of that, the camp crew led by my Establishment Manager, Jerry Katogo, recognized that this event was very close to the heart of the host and there was no room for a faulty delivery on the day, and that a very smooth and enriching experience for all was the goal. The chefs, waitron and bar teams took on a grand challenge too as some of these guests were restaurant tycoons in their own right! The ranger guides were kept busy with bass fishing, archery, clay pigeon shooting, star gazing and guided walks into the bushveld keeping all occupied with great safari pastimes. Our spa ladies were on tap to remove any stress unknowingly brought in from the city.

On the morning of their final day the Guest Rating Forms poured in. We achieved a 98% guest satisfaction feedback measured over 22 points of reference. This is obviously a spectacular result and one would naturally investigate it to ensure it perpetuates!

A lot can be said for the how’s and why’s of it all but clearly it boils down to one simple basic fact for me. “Do each and every job as if it’s your last and never hesitate in going the extra mile for your clients”.

Safaris are always at a premium price due to the nature of the logistics and planning involved, but going the extra mile, exchanging in abundance always makes for an enthralled client – and more importantly, a viewpoint that this once-in-a-lifetime experience was in the final analysis, great value for money.

Lets chat about bringing your group of top achievers into our exclusive award winning world of the Hayward’s Grand Safari where the experience itself will invigorate their passion for service and revitalize their tenacity to keep winning no matter what!